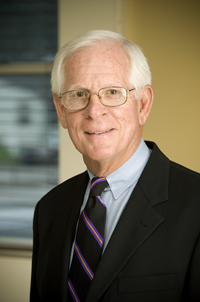 Charles Sweeney is a South Bend, Indiana native. He graduated from St. Joseph High School in 1956. He then attended the University of Dayton on a football scholarship and graduated with his Bachelor of Science degree in 1961. While at the University of Dayton, he was President of his junior class and Vice-President of his senior class. After getting his BS, he attended Notre Dame Law School and was admitted to practice law in 1964.

Following graduation, Mr. Sweeney joined the United States Army. He was commissioned as a 1st Lieutenant. Mr. Sweeney served in the Army for over two years as an officer in the Ordnance Corps. He was honorably discharged as a Captain.

Sweeney founded the firm in 1984 and began limiting his practice to the representation of injured persons and their families. Mr. Sweeney has tried a number of personal injury cases to verdict, including several catastrophic cases. Charles A. Sweeney serves on the Board of Directors of the Indiana Trial Lawyers Association. In 2005, Charles A. Sweeney became of counsel to the Sweeney Law Firm in Fort Wayne.

After a long and distinguished career, Mr. Sweeney retired from the practice of law in 2007.